The Carl Schurz Memorial Monument in Morningside Park in New York City honors one of the foremost German-Americans in U.S. history: Carl Schurz (1829-1906). The Vienna- born sculptor who created it, Karl Bitter (1867-1915), studied at the Academy of Fine Art in Vienna before immigrating to America in 1889. He produced numerous works of sculpture, including monuments to Franz Sigel and Joseph Pulitzer. The Schurz Monument is his most well known and was dedicated May 10, 1913. 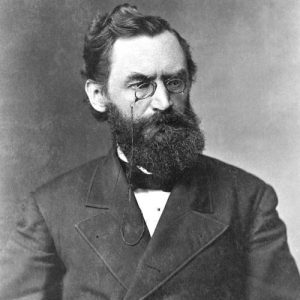 Schurz was a Forty-Eighter, as participants in the failed revolution of 1848 were known. Their goal was a united states of Germany under a republican form of government like in the U.S. After coming to the U.S. in 1852, he lived in various places, including Pennsylvania, Wisconsin, Michigan and Missouri, before moving to New York.

He quickly mastered the English language, becoming an eloquent orator in his adopted as well as native tongue. Like many Forty-Eighters, Schurz strongly supported the newly formed Republican Party and emerged as the major German-American spokesman during the crucial 1860 election that swept Lincoln into the White House. Rewarding him for his campaign work, Lincoln appointed him U.S. Minister to Spain. Seeking service in the field, Schurz returned to the U.S. in 1862 to take a position as Major General in the Union Army.

After the Civil War, Schurz moved to St. Louis, where he edited the Westliche Post, an influential German-American newspaper. With his reputation ever increasing, Schurz was elected to the U.S. Senate and thereafter was appointed U.S. Secretary of the Interior by President Rutherford B. Hayes, becoming the first German-born member of a presidential cabinet. After completing this service, he moved to New York City in 1881, where he remained the rest of his life.

In New York, Schurz edited the New York Tribune and Harper’s Weekly and was a popular speaker at event and programs across the country due not only to his oratorical skills in English and German, but also to the wisdom of his words.

One of his most famous speeches was on “True Americanism,” which he delivered in Boston in 1858. He said:

“Ideals are like stars; you will not succeed in touching them with your hands. But like the seafaring man on the desert of waters, you choose them as your guides, and following them you will reach your destiny.”

His personal motto was:

“Our country – right or wrong. If right, to be kept right. If wrong, to be set right.”

When it came to election time, candidates often sought the endorsement of Schurz and he based his decision not on the political party they represented, but the platform and principles they stood for.

Although fully involved and immersed in American life, Schurz recommended that German Americans combine the best of the Old and the New Worlds. He said:

On the occasion of the 150th anniversary of Schurz’s birth in 1979, former Secretary of State Henry Kissinger said that Schurz “stood for human dignity and individual freedom and democratic systems in the forefront of European movements of similar persuasion.” His contributions to America were widely recognized as well.

Upon his death, Mark Twain wrote: “As a rule I have had sufficient confidence in my ability to hunt out the right and sure of political channel for myself; but there have been times in the past thirty years when I lacked confidence. Then I dropped into Carl Schurz’s wake and followed. Followed with perfect confidence. Followed, and never regretted it.”

The Carl Schurz Memorial Monument reminds us of this great American, the contributions he made, the values he stood for, and the exemplary role model that he provides.

Carl Schurz was inducted into the German-American Hall of Fame in 2011. See his inductee page for more information.

Location
The Carl Schurz Monument is located in Morningside Park near the intersection of West 116th Street and Morningside Drive.

Links
For the further information on the Forty-Eighters, see the chapter on “The Men of 1848” from Rudolf Cronau’s German Achievements in America.