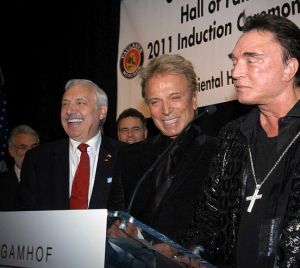 They’ve been inducted in to the German-American Hall of Fame (2011), and now Siegfried and Roy will have their lives portrayed on the silver screen.

Acclaimed actor and director Michael Bully Herbig is partnering with UFA Fiction to direct a “biopic” about the world-renowned, German-born entertainment duo. Perhaps the most successful magic & illusion act in history, Siegfried and Roy have performed for upwards of 25 million people. Siegfried Fischbacher and Roy Uwe Horn met in 1960, but their first big “splash” as entertainers took place at a charity benefit in Monte Carlo in 1966.

From that point onward, Siegfried and Roy became one of the most popular shows in Las Vegas and elsewhere. They retired in 2003 after Roy was critically injured from the bite of one of their white tigers.

Although UFA Fiction managing director Sebastian Werninger will be the executive producer of the motion picture, Siegfried and Roy themselves will be part of the film’s production.

“The German-American Hall of Fame is very proud of our friends and inductees, Siegfried and Roy. We can’t wait to see this movie,” concluded Mr. Hetzler.