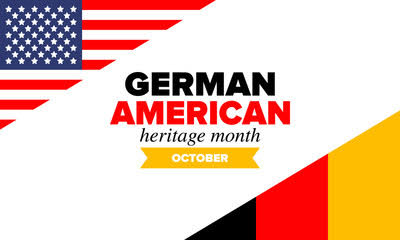 German-American Day (Deutsch-Amerikanischer Tag) is a holiday in the United States, observed annually on October 6.  It celebrates German-American  heritage and commemorates the founding of Germantown (now part of Philadelphia), Pennsylvania, in 1683.

Remembering the first thirteen German Quaker and Mennonite families settled in Germantown on October 6, 1863, provided the date for German-American Day.

Originally known under the name of “German Day,” the holiday was celebrated for the first time in Philadelphia in 1883 on the 200th anniversary of the founding; and similar celebrations developed later in other parts of the country.

In 1983, President Ronald Reagan proclaimed October 6 as German-American Day to celebrate and honor the 300th anniversary of German immigration to and culture in the United States. On August 6, 1987, Congress approved S.J. Resolution 108, designating October 6, 1987, as German-American Day. It became Pub. L. 100–104, 101  Stat.27 when President Reagan signed it on August 18. A proclamation (#5719) to this effect was issued October 2, 1987, by President Reagan in a formal ceremony in the White House Rose Garden. At that time, the President called on Americans to observe the day with appropriate ceremonies and activities. Presidents since then have continued to make proclamations to celebrate German-American Day.