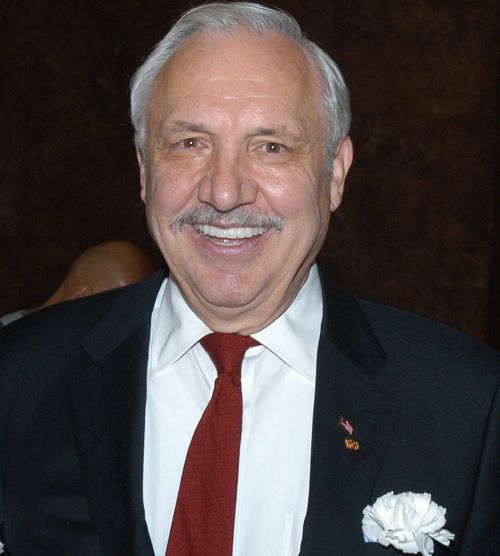 The Honorable William Hetzler has been a community leader in the greater New York area for several decades. A prominent and visible figure in the German-American community, Mr. Hetzler recently stepped down from the General Chairmanship of the German-American Steuben Parade after fifteen dramatically successful years at the helm. For eight years he was also Assistant to Governor George Pataki, New York State, for German Affairs, and finds time to serve on the Boards of other organizations with cultural, social and municipal missions. In 2004, Bill Hetzler founded and was elected as the first Chairman of the German-American Hall of Fame, with a kick-off announcement at the residence of the German Ambassador to the U.S., Wolfgang Ischinger, in Washington, DC and at the Mercedes Showroom in NYC.

Born in Munich, Germany to a long-established Bavarian family, Mr. Hetzler attended private prep school and graduated from business school in 1956. He immigrated to the United States the following year, and was drafted into the U.S. Army only seven months later. He received his Basic Training in Fort Hood, Texas with the famous “Hell on Wheels” Second Armored Division, and served as an interpreter in Germany, where he was assigned to the Third Armored Infantry “Spearhead” Division in Friedberg together with Elvis Presley. Mr. Hetzler was promoted to the rank of Sergeant, was honorably discharged in 1960, and became a United States Citizen in 1965.

In 1974, he purchased a delicatessen that he expanded into a chain of food stores. He owned and operated an art gallery in New York City’s Soho neighborhood. Mr. Hetzler continues to be a patron of the arts, partly through ongoing acquisitions for his personal collections; he also, as a Consulting Producer of the PBS Documentation “The German-Americans” received great accolades nationwide.

Mr. Hetzler currently operates the Hetzler Holding Company, which manages his real estate investments. He also serves on the Board of the Renewable Energy Development Company (R.E.D.), an International Energy Operation based in New York City. In 2003 Mr. Hetzler joined CONCILIUS, Europe’s largest political consulting company, with offices in Munich, Berlin, Brussels, Rome, Tel-Aviv, and other urban centers throughout Europe. His copy-righted slogan is: “We are well connected to connect you well!” He was appointed as a Trustee of the American Academy of Hospitality Sciences, which awards the prestigious Five Star Diamond Award to hotels, restaurants, chefs, airlines, cruise lines and products worldwide.

Mr. Hetzler is a Board member of the Ellis Island Award Committee, a member of the German-American Council of 1000, member of the Munich Press Club and the Leo Baeck Institute, as well as co-founder of the German-American Cultural Council, USA. He has served as President of the United German-American Committee USA, and donates his time as a member and Vice President of the Executive Board of the Plattduetsche Home Society of Franklin Square, NY, a large pioneering retirement and life-care community. Mr. Hetzler has been honored and recognized by a spectrum of organizations and leaders. He has received honors for improving U.S.-German relations and German-Jewish relations, and has also been awarded the prestigious Cross of the Order of Merit, First Class, from the Federal Republic of Germany in 2001. Other notable honors include: the coveted Ellis Island Congressional Medal of Honor (1998), Golden Medal of the Bundesrat of the Federal Republic of Germany (1994), Honorary Member of the Garment Center Knesset Israel Synagogue in NYC, Honorary Member of the New York City Detectives Association and the New York City Fire Department, Honorary Member of the Plattduetsche Volksfest Vereen von New York, the Plattduetsche Volksfest Vereen of NY & NJ, United Bavarians of Greater NY & NJ, and the “Bronxer Bayern” and the Bavarian Club Schlierachtaler Stamm. In May 2004, Mr. Hetzler was the Commencement Speaker at the Schiller International University’s Heidelberg campus.

A book about Mr. Hetzler Thank You America, was published in Munich in December 2007.

Bill Hetzler and his wife Jackie reside since the 1970’s in Atlantic Beach Estates, east of New York City. Son Jesse, operates a retail business in Brooklyn. He and his wife Jodie have two children, Jake born 2004 and Ava in 2005. Daughter Olivia, a former Assistant District Attorney and her husband Rob’s daughter Gemma was born in 2016. Bill’s son Andrew, graduated from Schiller International University in Heidelberg, Germany, and in 2007 graduated from Brooklyn Law School. He and his wife Rosie have a daughter Ellora, born in 2014. In 2014, Andrew opened and operates a very succssful Bavarian Restaurant in Long Beach, New York, called “Das Biergarten.”