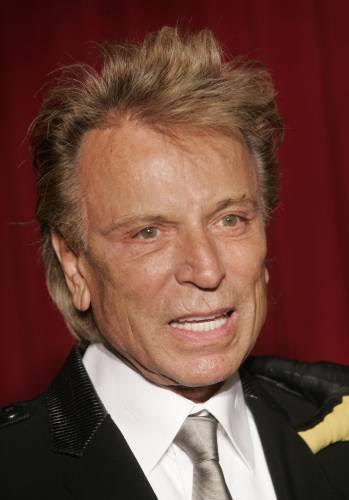 The Board of Trustees of the German-American Hall of Fame (GAMHOF) mourns the passing of Siegfried Fischbacher, a cherished and valued inductee of the GAMHOF.

Born in the Bavarian Alpine village of Rosenheim in 1939, Siegfried was working as a steward on a cruise ship in 1957 when he began performing magic tricks.   He tapped a ship’s waiter, Roy Horn, to serve as his ad hoc assistant, and a lifelong business and
entertainment partnership was born.

Siegfried & Roy utilized a cheetah in their early acts of illusion, but soon included lions, tigers and other exotic animals.   The pair is credited with helping to save the very rare white lions and white tigers from extinction, and blended these magnificent beasts into their act.

And what an act it was.   After presenting shows of illusion with animals in small venues across Germany and Switzerland, Siegfried & Roy brought their show to Las Vegas in 1967, and began performing six acts a week for 44 weeks a year at the famed Mirage Hotel in 1990.  They became the highest-grossing act in the United States, attracting millions who attended their most popular show in Las Vegas.

In 1988, Siegfried Fischbacher and Roy Horn were elated to become American citizens. In 2011, as aforementioned, the duo were unanimously elected and inducted into the German-American Hall of Fame.   They later came to New York’s Mandarin Oriental ballroom to attend and speak at a GAMHOF dinner honoring new inductees.

In 2003, when Roy Horn was seriously mauled by a tiger on stage during a live show, the decades-running act came to an end.   In May 2020, Roy died from complications of the COVID-19 virus, and Siegfried declared that he “had lost (his) best friend.”

Siegfried had suffered from pancreatic cancer, and in his final hours, spoke and prayed with his sister Dolore, a nun in Munich.

The Board of Trustees
German-American Hall of Fame
GAMHOF