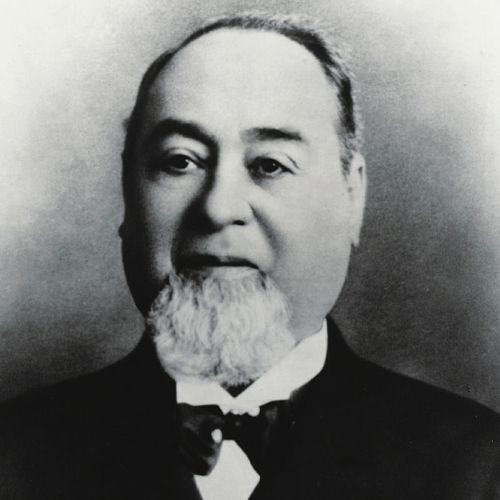 Levi Strauss, the man who gave the world blue jeans, was born in 1829 in Bavaria. Orphaned at 16 years of age, Levi Strauss decided to join his five brothers and sisters in the United States.

In 1843, young Levi sailed from Bremerhaven to New York where his two older brothers, Jonas and Louis, had already established a successful wholesale textile and tailoring business. After a stay of two days in New York, he continued on to the ranch of his uncle, Daniel Goldman in Louisville Kentucky. There he spent the next five years learning the language and the ways of his new homeland in order that he might someday take over his uncle’s ranch. But Levi had dreams of becoming an independent businessman, and for several years he walked the roads of Kentucky, selling cloth and notions from the pack on his back.

In 1853 he returned to New York upon hearing reports of gold being discovered in California. He persuaded his two brothers to provide him with a supply of silk, cloth, and a few luxury items which he planned to sell in San Francisco. In addition he took a supply of canvas intended for the Conestoga Wagons made by German wheelwrights in Pennsylvania and used by many gold prospectors to cross the continent.

In 1850 he took a ship for San Francisco. By the time he reached California he had sold everything to fellow passengers, except for the canvas.

Levi Strauss made his fortune in the California Gold Rush as the maker of sturdy pants — Levi’s, the world’s most famous denim jeans.

A tailor who had planned to make tents for miners, Strauss ended up stitching canvas pants that became famous for their durability. The “pants of Levi’s” came to be called simply Levi’s, and they became one of the best-selling products in his dry goods store.

He began using fabric from Nîmes, France, serge de Nîmes (the origin of the word denim), then added dye to make them blue. In the 1870s he partnered with Jacob Davis of Nevada to add copper rivets to the pockets.

Levi Strauss & Company became one of the world’s largest manufacturers of casual clothing and Strauss himself became a wealthy patron of the city of San Francisco. Strauss was a lifelong bachelor, and after his death in 1902 his nephews took over the company.