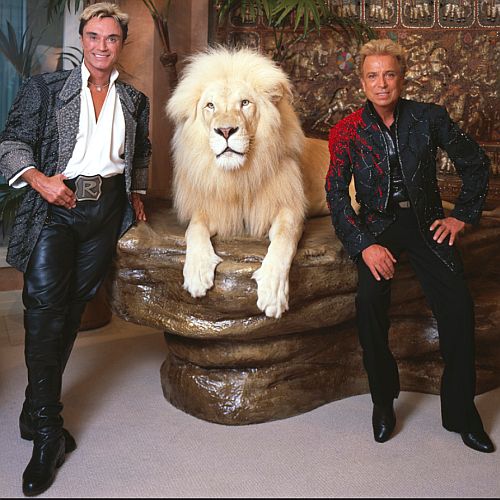 Siegfried & Roy are two German-American entertainers who became known for their appearances with white lions and tigers. From 1990 until an injury ended their stage careers on October 3, 2003, the duo formed the show “Siegfried & Roy At The Mirage”, which was regarded as the most-visited show in Las Vegas, USA. The magic word of the duo was “SARMOTI” (Siegfried And Roy, Masters Of The Impossible”).

Siegfried & Roy met in 1957. Siegfried took a job on an ocean liner, first working as a steward. Roy got a job on the same ship as a waiter. While working one night, Roy heard people applauding and looked over to see Siegfried on a makeshift stage, taking a rabbit out of a hat. The two young men became friends and Roy began to serve as Siegfried’s assistant.

One night Siegfried asked Roy what he thought of the show. Roy got up the nerve to tell Siegfried that he found the magic a little too predictable. Astounded at Roy’s candor, especially considering he was five years Siegfried’s junior, Siegfried asked him how the show might be made better. “If you can make a rabbit and a dove appear and disappear, can you do the same with a cheetah?” Roy inquired. “In magic, anything is possible,” Siegfried responded.

Though the next five years were tough, traveling around Europe, playing small, unsophisticated clubs for little pay, they refused to become discouraged. Instead they focused on their magic and presentation.
When Siegfried & Roy arrived in Las Vegas more than 30 years ago, a leading hotel executive said to them, “Boys, I have to tell you, magic doesn’t work in this town.”

Siegfried & Roy not only proved him wrong, but they succeeded even beyond their own wildest dreams. As International Magicians Society Chairman Tony Hassini stated, upon presenting the illusionists with the prestigious “Magicians of the Century” award at the Millennium Merlin Award ceremony, “Siegfried & Roy’s contribution to magic is indefinable. To the public, they are THE magicians, but they are also very much loved and respected by their peers. They have placed magic on a plateau and have become larger than life. I doubt if their contributions will ever be matched.”