In the early 19th century, Cincinnati rose to become the largest city west of the Allegheny Mountains. Located along the banks of the Ohio River, it emerged as the major city in the Ohio River Valley, becoming a center of business, industry and commerce. 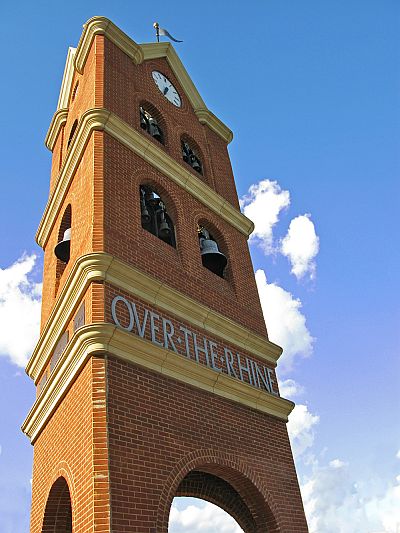 Immigrants and settlers often traveled down the Ohio River on their way westwards, with many stopping and staying in Cincinnati. By the 1830s, Germans began congregating in Cincinnati in an area north of the Miami-Erie Canal. Soon the whole neighborhood was filled with Germans and it became known as Over-the-Rhine, as when you went across a bridge over the canal, it was said you were going “over the Rhine” into the German district.

Soon there were German churches, bakeries, meat markets, newspapers, theaters, and, of course, breweries, throughout the district. Although Cincinnatians of German descent can now be found throughout the Greater Cincinnati area, Over-the-Rhine remains the historic German district and one that has experienced an upswing of late. Many buildings have been rehabbed, new businesses formed and new condos built throughout the area.

German districts and neighborhoods can be found elsewhere throughout the area. Wooden Shoe Hollow in Cincinnati was so named as farmers there wore wooden shoes just as they had in Northern Germany.

Across the river in Covington, Kentucky the visitor finds MainStrasse Village with a beautiful Glockenspiel, German restaurants and the Covington Turnverein. And east of Covington in nearby Newport is the Hofbräuhaus, the first official branch of HB München. And the new Moerlein Lager House is located on the Cincinnati side of the Ohio River with a wonderful view of the Roebling Suspension Bridge, which served as Roebling’s model for the Brooklyn Bridge.

Several churches offer occasional German services and Old St. Mary’s Church in Over-the-Rhine has a weekly Mass in German. More than thirty societies are affiliated with the German-American Citizens League of Greater Cincinnati, which was founded in 1895. In 2000, it opened the German Heritage Museum, which provides displays and information on the German heritage in the U.S., especially in the Ohio Valley.

Due to its German heritage Cincinnati acquired a reputation as the “Stadt der Feste,” or City of Festivals. Oktoberfest Zinzinnati takes place each September, beginning on the same date as the one in München, Cincinnati’s sister city, and is second in size only to the one there. Information on the many German-American festivals can be found at the website of the German-American Citizens League.

If you are looking for some Old World Gemütlichkeit, Cincinnati is the place to visit.

For those interested in reading more about the area see my German Heritage Guide to the Greater Cincinnati Area and also my Over-the-Rhine Tour Guide: Cincinnati’s Historic German District and Environs.