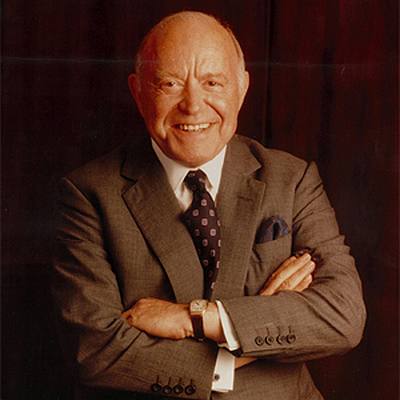 Businessman and philanthropist, born in Chemnitz, Germany. He went to the USA in 1922 and grew up in Detroit, where his mother remarried. He worked on the Ford Motor Co. assembly line before studying economics at Columbia University in New York City (1937 BA), and then worked for a small paper company and served with the Army Intelligence in World War 2.

After the War he worked as an executive with radio broadcasting companies, and as his own investments in various enterprises grew, he acquired and built so many radio and television stations that his Metromedia became the largest independent broadcast network (it also had an advertizing division).

In 1963 he acquired the Ice Capades and later the Harlem Globetrotters (1976). In 1985 he sold Metromedia for $2 billion, and by 1989 he was regarded as the richest American, with his personal fortune estimated at some $5.5 billion. John Kluge died in 2010 at a family home in Charlottesville, Va. He was 95.

Generous to a variety of causes, including his 1960 gift of a rare white tiger to President Eisenhower as a ‘gift to the children of America’, he long supported the United Cerebral Palsy Research and Educational Foundation, and in 1992 he singlehandedly subsidized the exhibit of works from the Vatican Library. But his philanthropies had not been greatly publicized until 1993, when he gave $60 million to Columbia to provide scholarships for minority students; added to the $50 million he had previously donated to Columbia, it made Kluge one of the largest single benefactors of any American educational institution. In 2000 he endowed the Library of Congress to establish an academic centre (the Kluge Center), and to fund the $1 million Kluge Prize in recognition of lifetime achievement in a range of disciplines in the human sciences not covered by the Nobel prizes.